Just did some “Cool / Boring” review of my piano routine to improve the practice time and focus more on the exercises that are relevant for me. 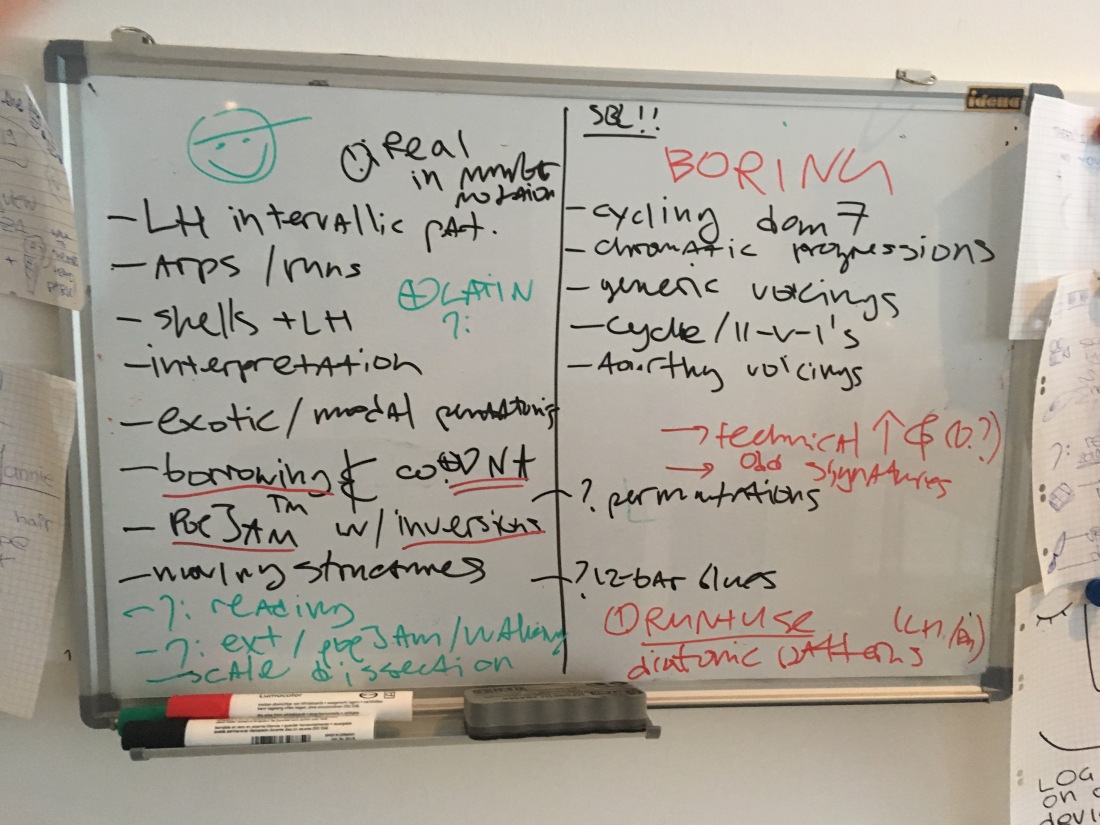 Just made a big review of my piano routine and goals, made it on paper and just wanted to put a quick digest of it here. So, I have three main areas of focus at the moment:

I have a lot of exercises in each area that I partly borrow from some jazz books, partly take from my music school notes, partly invent myself. Luckily, they seem to overlap pretty good, and, in fact, there’s an area where all three come together. So improving in one makes me better at the other two. I discovered it recently when I decided to harmonise a random modal scale and instead of playing block 7th chords use shell voicings and watch out for voice leading to preserve minimum movement. It was extremely satisfying to discover that I could do it almost fluently, without really thinking about fingerings: my fingers sort of already knew where to go, as they got used to these movements during my endless cycle of 4ths runs. So that was great. I also realised that I am getting comfortable enough with scales to use them over chord progressions that I play with the left hand and mix them up to — basically, play jazz solos! Wow. So I decided to add this new section to my practice where I will intentionally combine all my skills that I develop in different areas of focus and improve my overall comping technique.

One thing I kind of excluded for now is technical exercises — for speed and finger independency and stuff — I used to do them a lot last year (Hanon exercises, arpeggios etc.), but it just doesn’t feel beneficial for my current goal right now (which is to get good at jazz comping). So I just leave the out for now. Also, I don’t learn songs or scores that much as I did before (it’s extremely time-consuming and could be very frustrating), but it’s also something that simply doesn’t fit well with my routine. I mean, I do understand why conservatory pianists practice 6 hours a day — you just can’t cover all the stuff you want to cover within 2 hours, let alone 1 hours. But to make up for that, I’m going to start learning songs from the Real Book — shell voicings with left hand, melody with the right. Should be enough for now! Okay that was it for the practice review, gotta go, till later!

Whew! I think that was it for the deep practice challenge. I mean, technically, I’m just going on with it, simply continuing in this thread. But it’s nice that I managed to make it somehow measurable: during this challenge I went through 2 courses — Scott’s Jazz Survival Guide (walking bass lines) and Phil’s Chord Tones, which turned out to be such a wonderful supplement to each other. I was already decent at walking bass, but I kind of always played safe and didn’t really think about functional harmony all that much during playing and was heavily relying on finger patterns. Scott’s course taught me to always be open for different ways to go, different paths to transition — be it a chromatic move to the 3rd of the next chord, or 7th (or 11th?) below, or enclosure of the root of the next  chord — all of it — all I needed to finally start getting thins “walking bass line” sound to my lines, as opposed to the fake “boogie woogie” cheap sorta thing you get when you try to mimic it without really getting the mechanics of what’s happening under the hood. Now I know the process, it’s not magic for me anymore, and the only thing to do now is just become more fluent at it, which means — grind, grind, grind. Chord inversions were something I always tried to avoid because they play games with your brain, and your brain resists it, it simply wants some minor pentatonic box shapes happening! But I forced that, and I benefited from that tremendously: my fingers are breaking out of the box trap, and I’m already noticing when soloing that I’m much more aware of the functions of the notes that I’m playing rather than just the shape. Although, shapes are not evil! They’re just addictive, like sugar. LOL.

As of piano, well — I managed to get through all of the II — V — I skills in the Haerle book, and I got significantly better at shell voicings. So, like, playing things like minor ii — V — i around the cycle voicing them as 3-b5-6-b9 and 7-b9-3-6 is not a superhuman task for me anymore. I’m still slow at figuring out and mixing extensions like 11ths and 9ths above and below the root, especially in the rootless situations, but I feel like I’ve made huge progress.

That’s it for the challenge, now back to the regular shed 😄