Are we going to talk about them dissonances? Yes, of course, we are! I was focusing on left hand patterns during the last weeks and kind put my scale studies on power-saving mode (i. e. 20 minutes of relatively mindless recap in all keys in the beginning of the practice section as opposed to 2 hours of focused dissection in each key 😄). But I am planning to add some of harmonic and melodic minor exercises back in my routine as soon as I have a good grasp on the new left hand stuff. Can’t lose the momentum right now!

So, the harmonic minor modes. People tend to view them as harsh or dissonant or exotic or — insert your own word choice for “too f’d up to practice“. I view them as composer modes. My point being, they are so colourful that whenever you start practicing them and running them around the cycle of 4ths or circle of 5ths, you eventually end up composing a new piece. Yes, the natural 7th may sound creepy, and minor-major 7th chords are weird, but as soon as the natural 7th resolves to the root and minor-major chord steps back to reveal subtle clean minor, it suddenly clicks in your head and you see the beauty of it. To put it in a more entertaining way: the synthetic minor modes are so fucked up that their non-fucked up parts shine thousand times brighter as they would in a more balanced situation. Think of them as a completely drugged out actor who is somehow still capable to deliver the best Hamlet monologue ever — and then immediately pass out in the dressing room. Not that I’m saying that psychostimulants are a good thing, I’m just saying that Harmonic minor could be an entry poi— Okay, you got the idea, right? 🤓

I’m going to stop talking now and share a couple of scale exercises that might help you see the beauty of it more clearly by reducing the role of dissonances. No, I’m not going to make any more analogies that involve substances of abuse. 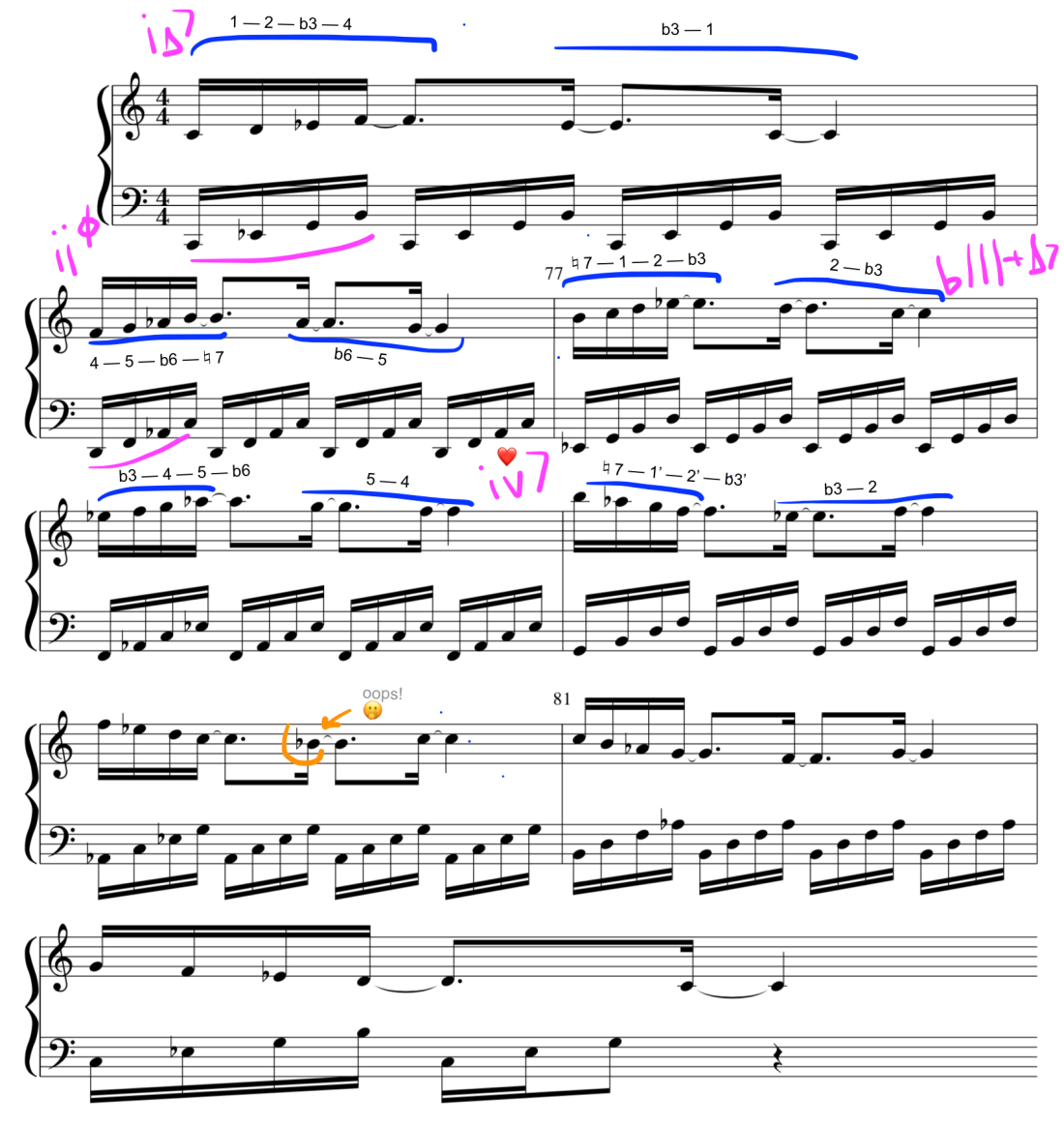 Yeah, this is a normal (considering you follow this blog for some time, haha!) scale dissection over moving degrees, but in this case, due to the choice of note grouping and arpeggiation in the left hand, it really starts to sound interesting. There are only two notes sounding together at the same time, therefore — less mud, therefore — more fun practicing!

What I’m doing here is just running up the scale in a weird pattern: 4 notes up, then 2 down, then again 4 up starting where I left off (see my marks on the sheet). After reaching the V7 chord, I start descending in the same fashion, but in reverse.

If this exercise looks too confusing (especially after my explanation), here’s another one — it’s much more straightforward and lightweight but does pretty much the same job.

i∆7 — V7 is one of the signature progressions of the Harmonic minor, so it makes sense to practice the scale over it. But practicing the scale in linear scalar motion is boring, so why not break it in 3rds and make your brain feel slightly confused for the next couple of hours? 😄

That’s it for today, I hope it was not too heady and I also attribute all swearing in this post to the dissonant quality of the scale in question. Practice hard, see you next time! 🤙🏻

Here’s what I mean: 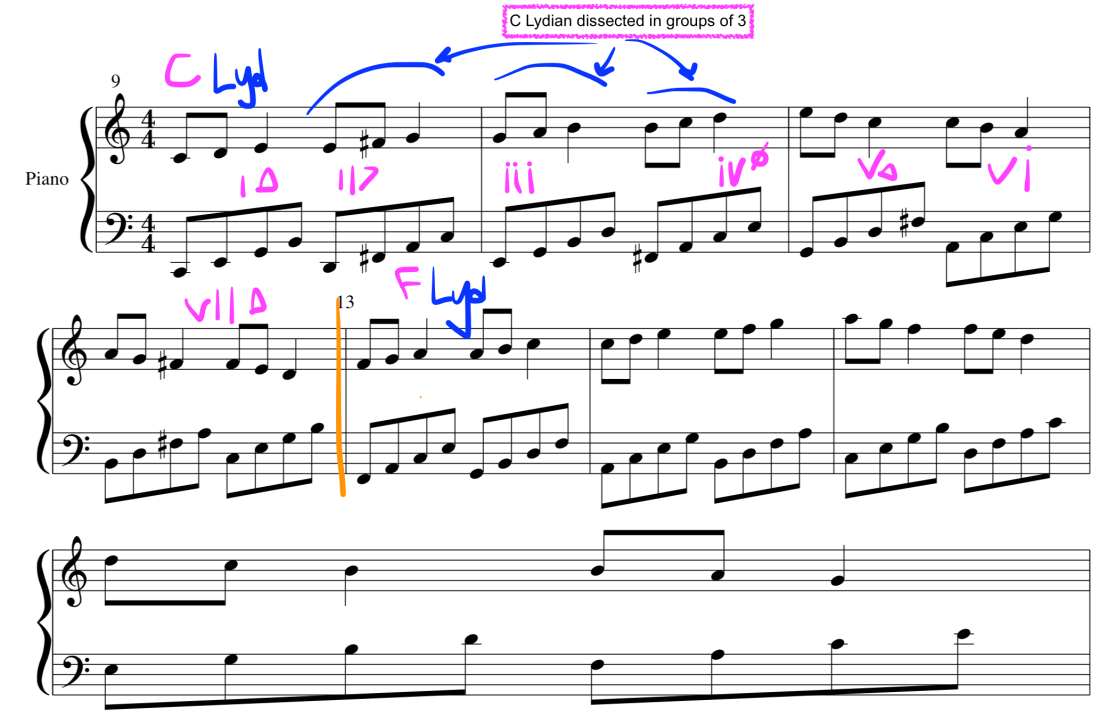 Surprisingly, it’s slightly easier to play than over the moving root arpeggio (because you don’t have to think about inversions all the time and simply go up the scale degrees) — and it sounds much better. Especially in sweet Lydian mode 🍭 Might get tricky in keys with a lot of accidentals though.

Harmonic minor is a bitch. Well, what I wanted to say is that it’s tricky in terms of getting fluent in it and not messing it up when you improvise. That raised 7th degree is super dissonant, it almost gives a feeling of a “wrong note” in a lot of contexts, so in order to get it properly wrong, you need to make sure your fingers remember what it is. The problem with accidentals in Hm is that the standard formulas for flats and sharps do not work, and “4 flats” does not automatically mean “Bb, Eb, Ab, Db”, as it would in any major mode. So you really need to get quick at figuring out what the 7th is and then raising it half step — or just get comfortable with all the accidentals in each key. Sounds like a lot of boring math, but I actually came up with a fun exercise that makes it sound super fancy and can turn your next practice session into a — you guessed it — extremely entertaining pastime.

The idea is simple: one of your hands only plays scale degrees with accidentals, the other one only plays naturals — in any octave, in any combination, harmonically or melodically. That’s it! You do it for one measure, and then you change hands. If the left was playing only altered degrees, it has to switch to naturals, the right then will switch to accidentals. For the next measure, you change the key (like, go around the cycle of 4ths maybe?). Here’s an example of Bb harmonic minor going into F harmonic minor going into Eb harmonic minor: 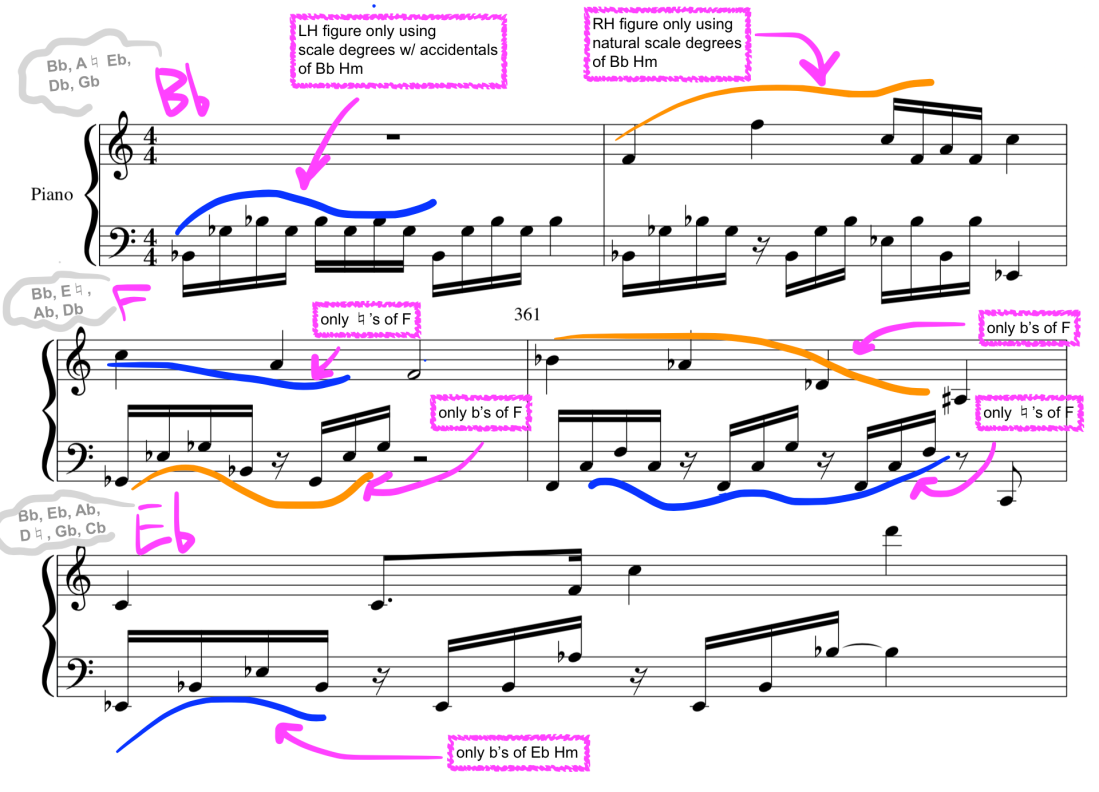 And here’s how it sounds:

It might start sounding a bit like shit once you get to the keys with a lot of accidentals (like Eb here), but in this case, you can just turn off the restrictions and use all notes in both hands.

Oh, and yes — try in any major mode or blues scale to experience the instant gratification of not having to think about the raised 7th 😆

These are normal broken 10ths with some diatonic line (going from Cm to Fm):

Here, I’ve just replaced 1s (C) with the 9ths (D) to get a super sexy sound of a 9th played below. Give it a try (and ignore the second measure):